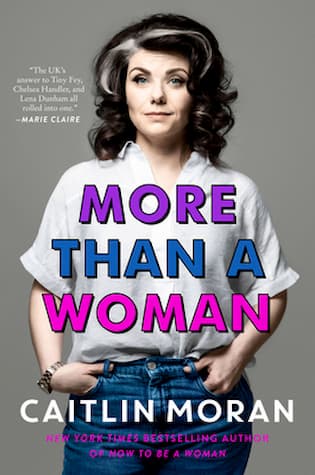 I’ve loved all of Caitlin Moran’s fiction (How to Build a Girl, How to Be Famous) but had never read any of her nonfiction, so was interested to see she has a new book out. More Than a Woman is her follow-up to How to Be a Woman, which she wrote when she was in her 30s. A time when she was sure she had life all figured out. A decade later and she’s back, sharing her perspective on how wrong she was, the changing times, the patriarchy, and midlife.

If anything’s going to get sorted out, you’re the one who’s going to have to do it. No more messy nights out or voyages of self-discovery. You are about to be required to hold the fabric of society together. For no pay. That’s what being a middle-aged woman is.

Moran chops her life into one-hour segments corresponding with various hours of the day. We march with her through getting a younger child off to school, handling a daughter’s crisis of confidence, aging parents, sexy time with her husband and not so sexy time dealing with the upkeep of an aging body. We’re privy to the ever-growing to-do list in her head, the aggravating joy of a puppy, the realities of long-term marriages, and the critical need for female friends. We know what she’s talking about. More Than a Woman is like a girls’ night out with your best friends, but a night as middle-aged women, not the clubbing years of our 20s and 30s. Cocktails, but no dancing on tables.

When Moran’s 19-year-old brother complains how feminism has gone too far and it’s men’s rights being eroded, she doesn’t lose her cool in the way I would expect. Instead, she educates him in a way that educated me. The patriarchy does not equal modern man. It is the system that’s been in place since men began recording history, whether they were religious figures or politicians. Women had no agency until the end of the 20th century so weren’t making the laws or structures we live by now. But just as they confined women, they confine men, trapping them in roles with expectations that are outdated and wrong (i.e. men are not capable of raising children). This is what needs to be smashed.

This kind of explanation and information was one of my biggest take-aways from More Than A Woman. Being a feminist often means being labeled a man-hater, but in reality that’s not true. We hate the structure of so many of our institutions and governments because they were designed to hold back 49.6% of the world’s population. That is the fight and it benefits all of us.

If all this sounds too serious and preachy, don’t worry. Moran is not about browbeating. I listened to More Than A Woman, which she narrates, and her forthright, positive attitude is energizing and welcoming. She’s not haranguing the reader, she simply makes her points clearly and with emphasis. The exuberance of her self-acceptance is bright and contagious. There’s no apologizing for mistakes, worries about bits that wobble now, no canned words of wisdom. Instead, with keen humor, a hilarious proficiency with profanity, and an attitude of ‘crack on’ Moran reminds women that we’ve been doing this for centuries and it’s time to give ourselves credit. And laugh. And keep fighting.

Killers of a Certain Age

The True Secret of Writing: Connecting Life with Language

Between Two Kingdoms: A Memoir

Portlandia: A Guide for Visitors

The Great Work of Your Life

How to Be Famous by Caitlin Moran

How To Be Famous: A Novel