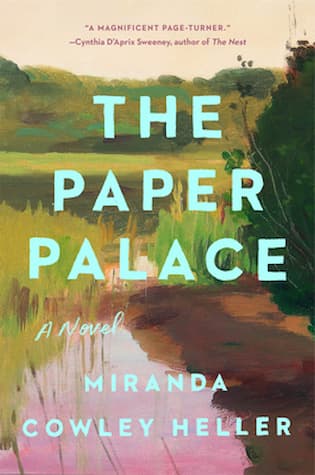 These are the words of Eleanor (Elle) a 50-year-old, happily married woman who had sex last night with Jonas, her best friend. He’s been in love with her since they were tweens. Their furtive encounter took place outside Elle’s summer beach home while their respective spouses, Peter and Gina, were inside. Now, she must decide what to do. The Paper Palace moves through Elle’s mind in the ensuing 24 hours while also revisiting swaths of her past as they all come together in making her choice.

What quickly becomes apparent is that Elle’s childhood was not conducive to either stability or fidelity. Her parents split when she and her sister were young and her mother, Wallace, used to send them to be watched by the lady next door, while she was having an affair with the woman’s husband. A beautiful, but cold woman damaged by her own upbringing Wallace is at once a negligent narcissist and, with her acerbic humor, one of the funniest characters in the book. Her self-involvement leads her into a long-term relationship that inflicts its own trauma on Elle and changes the trajectory of her friendship with Jonas. Her father is largely absent. Loving, but weak and ineffectual, he cuts his daughters out when his wife doesn’t like them.

Much of The Paper Palace takes place on New England beaches, with water being both the ultimate source of rejuvenation for Elle and the scene of her darkest memories. A mercurial novel, timelines, places, and people drop and scatter, quickly skittering on and off the page. When they come to rest they reveal bit and pieces of Eleanor’s life, the majority of which contain trauma. Except those involving her husband Peter, who is far and away my favorite character. A British financial journalist, his humor is sharp, but his tone deeply loving and protective. He adores Elle and their children.

Heller’s writing is mesmerizing. Her sense of time and place brought back Coppertone and salt air saturated paperbacks. But for all her descriptive prowess, the novel tired me. Elle’s life is a Greek tragedy or she’s related to Job. Either way, by the midpoint it felt like a trauma contest. That, coupled with an overly ambiguous ending, displaced one star on my rating. I’d recommend The Paper Palace for Heller’s prose alone (and I’m ready for whatever she writes next), but you need to be in the mood for heavy reading.

The Pearl that Broke its Shell

A Spindle Splintered by Alix Harrow