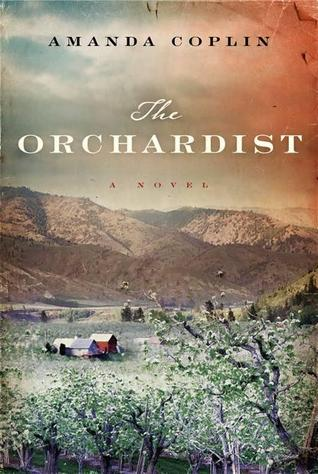 It’s already been said but bears repeating: Amanda Coplin’s The Orchardist is a stunning debut; the story of a plot of land and the people who shape it while it shapes them. When William Talmadge is nine he and his sister, Elsbeth settle into a remote, rural area of north-central Washington state with their mother. She has no explanation in choosing this location  but, even at such a young age, Talmadge understands.

They find an old miners’ camp set amidst apple and apricot trees and settle in. The orchards become their livelihood and after their mother dies in 1860, Talmadge and Elsbeth continue to manage them. Five years later, Elsbeth goes into the woods to forage for herbs and does not return, leaving Talmadge alone without answers. His sole companions are the rustlers who bring herds of horses through every year to graze in the pasture and, as the orchards expand, help pick fruit. Among them is a mute Indian named Clee who, without words, becomes Talmadge’s closest friend in the aftermath of the loss of his sister.

When Talmadge is in his forties his isolated world is invaded by two preteen girls, vastly pregnant and virtually feral. They do not speak to him or allow him anywhere near them but greedily, with animal hunger, take the food he leaves out for them. They settle in the orchard and by the time their babies are due, have reached a quiet level of trust with Talmadge. It is only after they give birth, with only one child surviving, that their past catches up with them and sets off events that change all their lives.

One of the sisters, Della, is a key character in the novel. Before arriving at the orchard both she and her sister were being held captive in a brothel. Della shares detailed memories of her sister’s abuse but seems to have little or no memory of her time in the brothel. It is readily apparent that she is deeply traumatized but, in a novel where the descriptive power is as ever present as oxygen, this aspect, even in Della’s own mind, stays a mystery. There are only the damaged remains and their impact on everyone. When, as a teen, Della leaves the farm to ride with the rustlers it is to live a life untethered to anyone or anything. At one point, she rides rodeo broncos and knows only

That dread, that sureness she was going to fail, to die, was why she did it. She craved, for some reason—she would not look at it directly—that sense of despair.

But even this level of physical danger is not enough and when she lands in jail, Talmadge finds out and visits her. He tries to reach out and offer her help, to which she replies, “I don’t need anything from you.”

This relationship is one of the most complex in the novel. Despite his urge to protect, Talmadge tries to give Della her independence and freedom because he thinks that is what she wants but when her life outside their valley spirals out of control he worries that he should have been stronger and held her back, reined her in.

Her anger against him was deep but, finally, had little to nothing to do with him. The anger was a mask of an emotion that would not show its true face. She fought against the same force against which he fought. Fate, inevitability, luck. God. He would fly in the face of this force now, for her. If she could be freed from it, he would free her.

If Della represents the outside world brought into the orchards, then Angelene, the baby born there, is the land itself. She is the most precious object in Talmadge’s life and when looking at her, as she grows up, he feels

She was the dream of the place that bore her, and she didn’t even know it.

The dichotomy between the two women, both of whom Talmadge feels compelled to protect, is extreme and Coplin captures his struggle to do the right thing for both and in some sense, lay to rest the ghosts of the past.

The Orchardist is a rich and vivid tale. Through hypnotic prose Coplin renders visible the passages of time, place, and characters. Each is depicted in perfect measure and we fall into the seasonal rhythms of the farm and its occupants as easily as we do the choppy pace of Della’s mind. When the book ends there is sadness, not just because it is ending, but because we are so deeply invested in the story that our hopes for the characters are their hopes. It takes Coplin, in holding true to life, to remind us that despite our best efforts, many of our questions will remain unanswered.

Our Souls at Night
Fear of Dying: A Novel

Know My Name by Chanel Miller