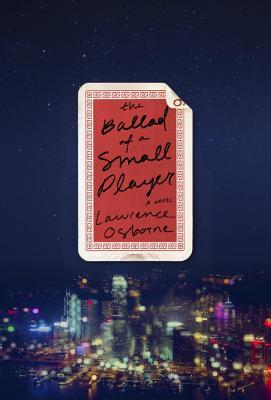 Lawrence Osborne is a travel journalist in addition to writing fiction, which may be why I read his novels so slowly. His words describe far-off places in a way that makes them appear before my eyes. His novel The Forgiven was one of my favorites in 2012 and now he is back with his latest, The Ballad of a Small Player. Whereas Forgiven took place in the hot, desolate landscape of Morocco, Player is set in the moist, lush world of Macau’s casinos and the islands around Hong Kong.

It was after eleven and the night shift was just in. Brutal, cynical men with red faces and cheap suits, smoking continuously, their eyes lusty little slits that sucked everything in and spat it out again.

It is the story of ‘Lord’ Doyle, a British ex-pat who finds himself in Macau in a shady form of early retirement—namely absconding with an elderly woman’s life savings. He lives in a hotel and haunts the casinos at night, taking resigned pleasure in being drunk and known as the gwai lo (ghost person aka white) who doesn’t care if he wins or loses. He meets and spends the night with a young woman named Dao-Ming who later rescues him in the Intercontinental Hotel where he is about to default on an enormous restaurant tab. By this point he has lost everything so she takes him to her apartment on a small island and nurses him back to health. He repays her kindness by stealing all her earnings as an escort and heads back to the casinos where he embarks on an unbelievable winning streak.

Ballad of a Small Player reads like a waking dream, where it is impossible to tell night from day and hours pass in minutes. The plot moves at a pace that is both frenetic (as bets are placed and thousands of dollars lost and won in minutes) and languorous (the time spent with Dao-Ming).  Osborne entwines the ghost stories and superstitions of the Chinese throughout the novel, focusing, in particular, on the hungry ghost—a spiritual being with a “mouth the size of a needle eye and stomachs the size of caves. These are humans who were overcome by their desires and never satisfied, often dying as the victim of suicide or a violent death. As the novel progresses and Doyle’s appetites are not assuaged with massive quantities of alcohol and ever larger quantities of food, we begin to wonder if he is not already lost to this world and a hungry ghost himself.

Scallops made no dent in me, nor did orange duck. For that matter, I was starving for the next two days, even though I ate non-stop.

This is not so much a story, although it clearly has one, as a descriptive tour de force of the lurid environment within the casinos and the harsh but delicate beauty of the nature that surrounds them. Osborne uses language like few other authors, writing of the “sweet rancid sponginess” of a casino’s carpets and describing both the action in the casinos and the food sold in small local restaurants with such taut precision that it is a visual experience. The ending, when it comes, is surprising and yet, feels inevitable. We are not certain what is real within these neon palaces of greed and opulence and what is merely a façade for the desperate lives being gambled away.

The Cuban Affair by Nelson DeMille

The Forgiven
Hunters in the Dark