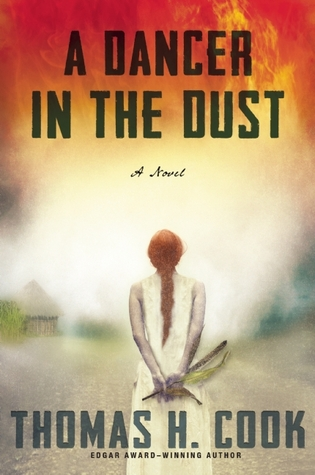 Ray Campbell is a risk assessment manager when A Dancer in the Dust begins but it is his time as an aid worker in Africa decades ago that forms the foundation of the novel. As a young man assigned to the newly independent country of Lubanda he is filled with idealism and a desire to help the people of this arid, under-developed country. When he meets Martine, a white woman who was born in the country and fully considers herself to be Lubandan, she throws his beliefs into confusion. Of all the money and volunteer projects being funneled into Lubanda she says:

And if we do not or cannot become what they want us to become, they will make us ashamed of what we are.

It is this sentiment that makes Martine problematic for the small country’s new leaders and they begin to exert pressure on her to stop growing locally used crops on her small farm and start growing the profitable (but not used locally) crop of coffee. For his part, Campbell finds himself falling in love with Martine and believes that if she will just give up and leave Lubanda with him, they can have a better life back in America. In an effort to make Martine see things his way he gets involved and the results lead to the end of his dreams and Martine’s death.

Now, over twenty years later, Campbell is informed of a Lubandan friend’s murder in New York City. When he is told that the friend had information that was valuable to the country’s new leadership he begins a search to find his friend’s killers and somehow, redeem himself to Martine’s memory.

When reading a Cook mystery there is always a twist and it is almost always a surprise. Sometimes more than others, which is the case in the case of A Dancer in the Dust. The novel is beautifully written but when the reveal comes, it feels secondary and flat, unlike his last novel, Sandrine’s Case, in which everything went upside-down at the end. Instead of the mystery the focus in the novel is on love and/or charity and what happens when it demands change. By the end Campbell discovers,

And surely, among those errors, I have learned, there is none deeper, nor more fraught with peril, than to believe that your world, your values, your sense of comfort and achievement, should be someone else’s, too.

For much of the story this applies to the Western belief that our way is best in all things and giving is contingent on adherence to those ways. Perhaps, instead of a bang-up mystery the truth Cook is promoting in Dust is on a smaller scale and instead of being about race, of which there is much said and learned in the novel, it is the fact that trying to make anyone into what you want them to be is going to take away from what they are…and will not end well.

This book can be ordered online at:

The English Wife by Lauren Willig