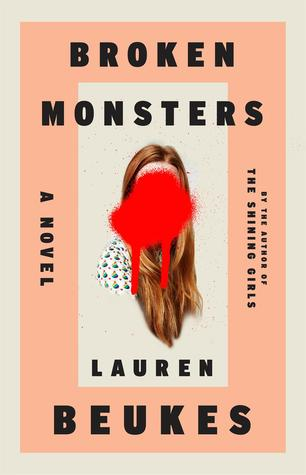 Lauren Beukes covered creepy in her debut The Shining Girls but it doesn’t compare to just how mess-with-your-mind she gets in her latest, Broken Monsters. As if Detroit hasn’t taken enough hits in the last decade it is now the setting for this scary tale of an amorphous monster creating gruesome art out of mixed human and animal body parts…taken from living subjects. Detective Gabriella Versado must find the killer all while trying to manage her teenage daughter who, on the surface is a star student but thinks her brains and street smarts equip her to handle online predators. Other characters caught in the goings-on of Detroit are Jonno Haim, a pseudo-journalist who has crash landed in Detroit after his life in NYC burned out and TK, a street person trying to stay clean and help others. Floating amongst them is an artist who begins with a vision but ends up with dreams he can’t tell from reality.

…all eaten up on the inside by the dreaming thing he let into his head that didn’t mean to get trapped here, drawn out by the raw wound of the man’s mind, blazing like a lamp in one of those border places where the skin of the worlds are permeable…

Broken Monsters takes place over ten days in November, beginning with the discovery of a young boy’s torso attached to the hind legs of a fawn. Beukes crisscrosses the action between Versado’s attempts to control the murder investigation with Haim’s desire to make a name for himself using the ‘public’s need to know’ excuse, Thomas’s unknowing interactions with the possible killer, and Layla’s attempts to grow up and find outlets for her empathy. By flipping between everyday emotional and physical stories and the exaggerated gruesomeness of the killer’s actions the novel maintains a level of tension that induces non-stop reading. Beukes ups the ante by making the killing tool a nail gun which, for me, meant I was reading while waving my hand in front of my eyes to keep me from seeing what was happening.  No logic to that kind of fear.

Ultimately, what makes Broken Monsters the most terrifying is not the grossness of the story but the message that lies beneath. That of the very real horror engulfing our me-me-me society—the growing need of so many to be seen and seen and seen again whether it be selfies, Instagram, or YouTube. At first it’s just lowlife Haim who, when he happens on one of the murder scenes, films it on his phone and puts it on the internet to reclaim the fame he never had. But then, it is the killer who so wants to be seen that when it figures out the game, works relentlessly to make it so. When is it enough?

This book can be purchase online at:

The Charmed Wife: A Novel

Songbirds: A Novel by Christy Lefteri

Lovers at the Chameleon Club, Paris 1932