Let Me Be Frank With You by Richard Ford
Published by Ecco
Publication date: November 4th 2014 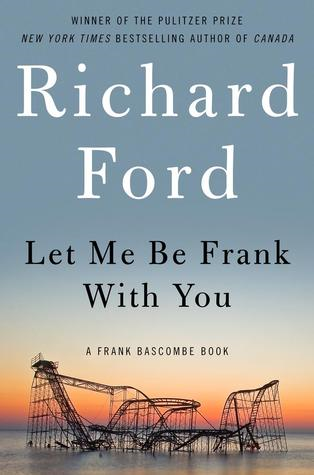 Frank Bascombe is back in Richard Ford’s Let Me Be Frank With You and I, for one am happy to see him again. Ford’s last novel, The Lay of the Land, covered Bascombe’s travails through his mid-fifties in a way that perfectly encapsulated the middle-age process of fight and accept. In Let Me Be Frank With You, Bascombe moves through four vignettes that are comprised of encounters with a business acquaintance, a stranger, his ex-wife, and an old friend. It’s the two weeks before Christmas in 2012 and we follow him through meetings that are both odd and innocuous. He goes to the Jersey shore to meet the man who bought his beach house years ago and survey its wreckage after Hurricane Sandy, lets a stranger into his new home because she lived there as a child, visits his ex-wife Ann in the expensive assisted care facility where she now lives due to Parkinson’s, and goes to see an old acquaintance who is dying of colon cancer.

In and of themselves these chapters do not capture anything extraordinary. There are certain books and movies where conversations occur with words so profound we wish we could say them, but the reality is we don’t because really, they’re just amazing dialogue but not likely to ever occur between two people. This doesn’t happen in Let Me Be Frank. Instead, there is the reality of the awkward pauses and words left unsaid, the times when you’re not sure what you should say. There is no sage advice or long delayed realizations, no bringing forth of profound insights. Instead, in each of these events it is not so much what is happening or being said as what is not. Ford shows us these moments, when Bascombe wonders why exactly he is in a situation or what is expected of him and they provide more relief than the perfectly turned phrase or spot-on sentiment.

Let Me Be Frank With You doesn’t have the heft of The Lay of the Land but doesn’t need it. Instead, the slimmer length of the novel feels appropriate for what Ford is conveying about Bascombe’s life. This is the winding down, the summing-up, the way the mind goes when a certain point in life has been reached. For Bascombe, at sixty-nine, after the death of a child and prostate cancer it’s more about letting go than piling on and Ford writes his sentiments with exactly the right amount of gravitas and acerbic humor. Let Me Be Frank With You is not the pontifications of an older man who now believes himself to possess all the wisdom and insight the years should have bestowed, but, instead, is the quiet musings of someone who sees himself quite clearly in the mirror and is simply going to play through as best he can. Ford makes this clear right from the title with the simple request ‘let me be Frank with you’ because this is all there is. Frank Bascombe is not a man to linger too long on the what-ifs or the past. He holds true to an ethos of accepting and getting on and if he does so with an astringent attitude, so much the better for us. There is no self-pity and no excess of emotion in this man, just a quiet stating of the facts. And for that, I’m grateful. I don’t know if he’ll be back, but for this middle-aged woman Frank Bascombe reflects much of the inner communication of all Boomers as they face the back nine. We are who we are.

What isn’t ignited by stress? I didn’t know stress even existed in my twenties. What happened that brought it into our world? Where was it before? My guess is it was latent in what previous generations thought of as pleasure but has now transformed the whole psychic neighborhood.

Top 10 Books That Made Me Say Yum!

The Broken Girls: A Novel

Dark Fiction: The Line That Held Us
The Sellout: A Novel