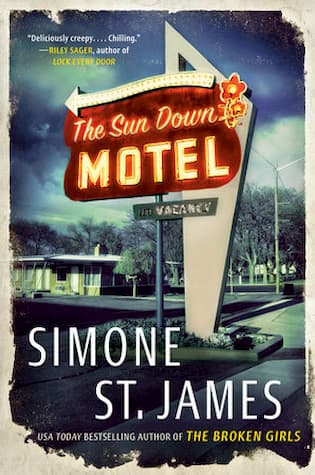 I was going to call today and Wednesday’s posts ‘The Saints that Saved My Reading’, but decided my odd sense of humor might not translate well. You see, I’ve been experiencing Goldilocks reading—everything is too much or not enough and it’s annoying. That is until last week when the saints arrived. Today I’m here to talk about The Sun Down Motel by Simone St. James. Check back on Wednesday to see which other saint gave me a case of happy reading.

The Sun Down Motel is in the small town of Fell, New York. It’s been ill-fated since a woman’s body was discovered at the construction site in 1979. After it opened there was an accidental death involving a little boy, so by the time Vivian arrives in 1982 it’s become the kind of place where only people who don’t want to be seen stay. For Vivian, that’s all right. She’s 20 and has left home, taking a job as the night desk clerk at the Sun Down to earn the money she needs to get to NYC and become an actress. Fast forward 35 years and Carly is now the new night clerk at the Sun Down, which if possible, is more rundown and seedier. She’s Vivian’s niece and her mother just died, after spending 35 years mourning a sister who disappeared without a trace. From a motel in New York called the Sun Down.

It isn’t long before Viv notices that things at the Sun Down are a bit off. She hears footsteps and smells cigarette smoke when no one’s there. Doors to empty rooms open. All the electricity goes out. It isn’t until she sees a screaming woman who isn’t there that she decides to stop being scared and start trying to find out what’s going on.  She quickly learns that since the first woman two other women have been murdered in the past two years. With nothing else to do with her time, Viv decides to play detective, but the more she discovers the worse the Sun Down gets.

Carly follows in her aunt’s footsteps, except it’s Viv’s disappearance she wants to solve. With the aid of the internet and a roommate with an interest in true crime she learns about all the other unsolved murders and uncovers clues previously missed. She also experiences the Sun Down’s unusual occurrences: footsteps, opening doors, cries for help, a screaming woman.

St. James keeps Carly and Viv running side by side through The Sun Down Motel until the flash point when their stories collide. She does so in a way that’s understated and, for me, far scarier than maximalist horror techniques. Sights and sounds that can’t be explained, the tingling of intuition, and the inherent fact of being a woman alone at night all add up to a novel that kept me on edge.

Some of us like the dark. It’s what we know.

The Broken Girls: A Novel
The Girl Who Slept with God

Riots I Have Known

Into the Water: A Novel

Living Beautifully with Uncertainty and Change

We Wish You Luck

From Scratch: Inside the Food Network

The Broken Girls: A Novel

The Book of Cold Cases