Your Heart Is a Muscle the Size of a Fist by Sunil Yapa
Published by Lee Boudreaux / Back Bay Books
Publication date: October 18th 2016 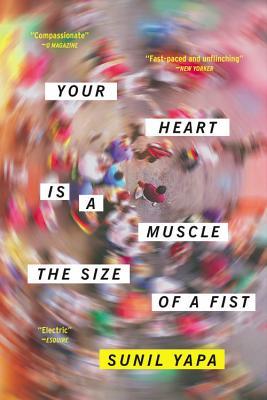 Your Heart is a Muscle the Size of a Fist is one of those novels that runs on pure adrenaline. Author Sunil Yapa drops the reader into the chaos of the 1999 WTO protests in Seattle with such force that the fight or flight mechanism kicks in and there is no choice but to keep reading. The stream of consciousness style he employs means full immersion in each of the characters’ heads, whether it be Julia and Park, the two police officers assigned to the protest area; Bishop, the Chief of Police; Victor, a nineteen-year-old black man who happens to be the Chief’s son who has been missing for two years; King, a young woman who is one of the protest’s organizers; or Dr. Charles Wickramsinghe, the Deputy Foreign Minister of Finance and Planning from Sri Lanka, one of the delegates to the event. The shrinking net of time and events catches each of the characters, forcing them against each other as they try and do what they believe to be best.

Each of the short chapters in Your Heart is a Muscle stays tightly focused on one of the above characters. Yapa goes even further in extruding emotions by keeping the timeline live. There is very little going back to the past beyond the most basic filling in of backstories. What is known is that Victor ran away from home two years ago shortly after his mother’s death. Now he’s come back to Seattle, but is in no hurry to return to his stepfather. Instead, he meets some of the protesters and joins them as they try and block access to the convention center where the WTO will meet. Park was a first responder at the Oklahoma City bombing and King is trying to keep the past from catching up with her while still trying to do the right thing.

Much of Your Heart is a Muscle reads like a newspaper account. The amount of detail Yapa includes about both the protestors’ tactics and their knowledge of how to counter police intimidation and submission tactics is unnerving as is the extent of the police response to a non-violent crowd.

She was trained police and what had she done? She wanted to tell Park she had done what she was trained to do. She had protected herself and her fellow officers. In the face of a clear threat, she had laid it down.

But, because this is fiction, Yapa is under no obligation to maintain an even tone or emotional detachment and so much of Your Heart is a Muscle is brutally painful. Like a large crowd and any force designed to control that crowd, it surges beyond the borders of the page, causing a primal response. From the outside reading in, the emotions cascade and overlap, with outrage, fear, sorrow and sympathy fighting for brain space.

While Your Heart is a Muscle the Size of a Fist may be an unwieldy title, by the end of the book its meaning is clear. The heart is a universal symbol of love, but with the physical appearance of a weapon of hate. Yapa fills the novel with diametrically opposed emotions that cover the motivations of its characters. Sadly, given recent events in America it feels depressingly prescient and relevant.

The Beauty of Your Face

The Mountains Sing
Idaho: A Novel by Emily Ruskovich

If You Want to Make God Laugh: A Novel

Everyone Brave is Forgiven
The Book of Joy: Lasting Happiness in a Changing World