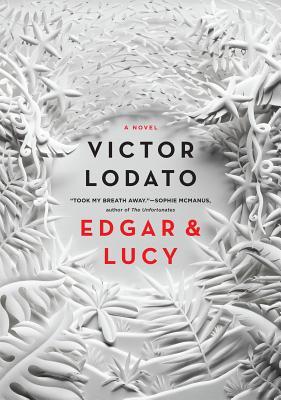 Having a life meant having a story.

This is one of the first thoughts we hear from eight-year-old Edgar in Victor Lodato’s novel, Edgar & Lucy. It’s soon followed by the knowledge that the only way to know the story of when you were a baby is for someone else to tell it to you. And that’s Edgar’s biggest problem—neither his mother Lucy or his grandmother Florence are willing to share the past with him. Some things he knows: his father is dead, his mother walks with a limp and his grandmother sometimes talks to people who aren’t there, but there are no answers to his question of why. When his world comes undone he meets a man who, while he may not have answers, has the ability to give Edgar a new reality where the questions don’t matter.

Some novels span oceans with their story, but while they may be extensive they never get beyond the shallows. Edgar & Lucy is the opposite—a smaller expanse composed of three main characters and one year, but in water that is almost bottomless with grief. Both Lucy and Florence grapple with it—one as a wife and the other as a mother, but neither knows how to deal with it in regard to Edgar. So, Lucy keeps her distance; an alluring but mysterious presence in Edgar’s life, while Florence is the opposite—ponderous and dependable. For a small child, especially one like Edgar with his albino skin and his autistic tendencies, his grandmother is the grounding and love he needs. When she dies, that ground disappears and he is left in the unstable terrain of his mother. Only when Edgar meets Conrad, a man who keeps him from being bullied, does he feel safe. Unbeknownst to him, Conrad is a father without a son, mired in his own grief, who believes Edgar can bring him justice.

Lodato fills Edgar and Lucy with haunting character studies. Florence’s rough red hands are painfully apparent, but what is unknown by the people currently in her life is not only how she got them (working in a commercial laundry from the time she was seventeen), but what she does with them (designs and sews beautiful fashionable clothes for other women). Lucy may be less palatable as a superficial, brash woman who never wanted to have children, but her fears stem both from a childhood of damage and the dawning realization that her husband Frank’s mental health is crashing. They are two damaged people holding each other upright.

Not even twenty pages into Edgar & Lucy and I feel like Lodato is channeling Hanya Yanighara and Mark Helprin—two authors I love for the heavy cream of their prose. He doesn’t hold back—his words roll rich and luscious across the page, soaking into it and the reader’s mind. Like these authors’ books Edgar & Lucy is also a maximalist experience. The story envelops and, at times, some of the plot feels a bit cloying. Still, these are gorgeous words in a novel that explores how often, even with the young, lies told with love are more dangerous than the truth.

Lincoln in the Bardo

The Gimmicks: A Novel
What I’m Reading in July

The Book of Unknown Americans
Empress of the Night: Review and a GIVEAWAY