In a surprising bit of synchronicity, I read two great novels recently that both referenced Shakespeare—which is why the quote from Macbeth for this post’s title. Also, because there is a lot of wicked in both these novels. In New Boy, Tracy Chevalier adapts the very grown-up themes of Othello to 1970s elementary school. Then M.L. Rio uses Shakespeare’s plays as the core of her mystery, If We Were Villains. Set at an alternative college of the arts, seven theater majors are studying to become Shakespearean actors. When one of them dies there are consequences for all of them.

If the weight of Shakespeare makes you nervous, let go of that fear. Both of these novels were the epitome of tension and well-constructed plot. Which is also true of Shakespeare’s work if you don’t let yourself get too hung up on the language (sorry, that’s the English major geek in me coming out). So, forget your college Literature class trauma and dive in.

By choosing elementary school as her setting for New Boy Chevalier takes a combustible point in life and puts it in a Shakespearean play of high drama about love and jealousy. She goes even further with this group of suburban Washington D.C. eleven-year-olds when she makes the new boy, Osei, a black transfer student. Suddenly, you have the age where childhood is starting to be infiltrated with grown-up attitudes. It’s also the 1970s and most of the children have not been around a person of color so the prejudice and ignorance runs strong. For Osei the difficulties of being new and black are eased when he is paired off with another student to guide him through his new schedule. She’s Dee and she’s the prettiest and most popular girl at school. Of course, this is Othello, so Dee’s interest in Osei does not end well.

Chevalier is seamless in the atmosphere she creates in New Boy. She stays true to Shakespeare’s dramatics, but in setting them in 20th century America makes them recognizable to the modern reader. For children of the 70s it’s even better, with nostalgia-inducing pop culture markers, from Herbal Essence shampoo, the Jackson Five and Archie comic books, to, Partridge Family lunch boxes. That this nostalgic high is shot through with the stomach clenching terror of navigating a new school’s classroom, recess and cafeteria politics feels almost sadistic on Chevalier’s part, but is only a job well-done by a clever author. In only one day of school and less than 250 pages, she makes New Boy a nuanced exploration of jealousy and the ever-more relevant themes of racism and lies. 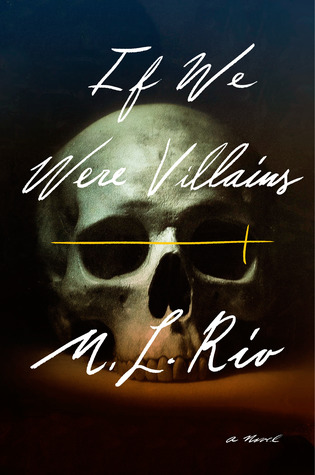 If We Were Villains by M.L. Rio
Published by Flatiron Books
Publication date: April 11th 2017

Actors are by nature volatile—alchemic creatures composed of incendiary elements, emotion and ego and envy. Heat them up, stir them together, and sometimes you get gold. Sometimes disaster.

Somehow, despite being about college and  reading, If We Were Villains slipped under my radar. It took rave reviews from trusted bloggers, Novel Visits and Sarah’s Book Shelves to make me scramble for this book, but I’m really glad I did. Oliver, James, Richard, Alexander, Meredith, Filippa and Wren are the friends and when the novel opens, Oliver is being released from prison after serving ten years for the murder of one of the others. Who he killed is not the mystery but everything else is.

If We Were Villains is Rio’s debut, but she writes with assurance about the intricacies of theater acting and the demands of the training that goes into the profession. This could be due to being an actor, but that does not explain away how well she maneuvers what could be a cumbersome cast and plot. She even incorporates dialogue from the plays the characters are studying into their conversations. But don’t worry! As much as I was delighted to read the lines of some of Shakespeare’s plays again, they are not critical to the plot or its tension—they’re an enhancement. Instead, it is how Rio strains the bonds of friendship with ambition, love and coming-of-age that makes If We Were Villains mesmerizing reading.

Murder’s as near to lust as flame to smoke. -Pericles

Weather: A Novel by Jenny Offill