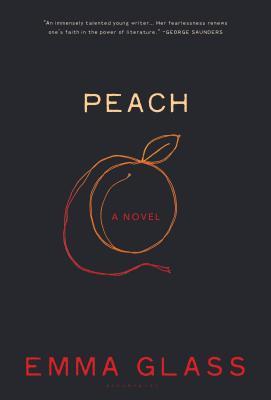 Peach is high intensity fiction, opening with an explosion of visceral, unremitting fear and pain as a young woman tries to pull herself together after being raped. Everything is relayed from a sensory level, from the odor of the man to the wool fibers of her mittens against her chin to the scalding hot water she stands in after she staggers home and into the shower. It is unremitting and author Emma Glass doesn’t let up for the rest of the novel, making for a book that repulsed me even as I was trying to make sense of it.

Peach is the girl’s name and for every minute after she’s raped until the novel’s end she vomits every thought onto the page. Only they’re not quite thoughts—at least not in a cohesive way. Instead, they are visual and highly exaggerated—she licks her baby brother because he is covered in powdered sugar, even though it’s really baby powder. Her parents are highly sexualized and tell her they wish she would hurry up and get pregnant so her little brother would have a playmate near his age even though she’s not even in college yet. And then there’s the rapist, who is overpoweringly described repeatedly in terms of meat and its horrible greasiness and rancid smell. Peach is a vegetarian so this metaphor makes sense, but when added onto the already unrelenting tide of Peach’s impressions of the world it is too much. As is the violence Peach perpetrates against herself.

By the time I finished Peach I was not only mentally exhausted I was not sure what I had read. Was it a novel about the hyper-realism or surrealism left behind after sexual assault? Was it in some way about the violence against animals by meat-eaters? While I give Glass credit for extraordinary creativity in her choice of writing style the end result did not hold together. The style took precedence over the words’ meaning, with form trampling function.

If Peach is meant to depict what happens when the fragile barrier between sanity and a mental break occurs, due to extreme trauma, then Glass succeeds. But doing so without any other quieter, rational narrative to balance the deeply disturbing cacophony from inside Peach’s mind, leaves the reader with nothing to hold onto, nothing to provide the mental state to assess what is happening and so, retreat is all that’s left. Peach isn’t a badly written novel, but it feels as if Glass has won a battle but lost the war. Or, in this case, the reader.