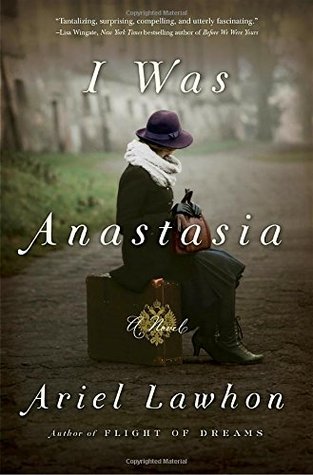 I Was Anastasia by Ariel Lawhon achieves quite a feat—taking a subject about which there is no longer any mystery and making it mysterious. Thanks to DNA testing, it is now known that Grand Duchess Anastasia Nikolaevna of Russia died with the rest of her family in the summer of 1918, slaughtered by the Communists in the basement of a house in the town of Ekaterinburg. But, for decades afterwards a woman called Anna Anderson claimed to be Anastasia, saying she was saved by a soldier and escaped the USSR. It was sensational news right up until the time of her death. Lawhon makes no pretense of writing a what-if novel, but neither does she dwell on who Anna really is. Instead, using history, research and the same charisma and mystery that Anna herself exuded, she writes an entire novel that beckons and seduces.

Lawhon pitches the last months of Anastasia’s life against Anna’s years—from 1918 to 1970. Told in bits and pieces, the timelines in I Was Anastasia jump and skip like oil in a hot pan and just as randomly. There are scenes at the Ritz-Carlton in Manhattan in the late 1920s, back to an insane asylum not even a decade earlier. She rises, falls, and rises again, always dependent on who is supporting her cause at the time. Her benefactors range from a 60-year-old NYC heiress to a German baron to an American history professor (whom she married).

For as far and wide as Anna’s life spreads, Anastasia’s grows ever smaller as she and her family are moved from a palace to a government official’s house to a simple home. Everything, from food, their staff, and even their movements is restricted. If, like me, you find the Romanov children to be a source of endless fascination—so beautiful but doomed—then I Was Anastasia is mesmerizing. It may only cover a year, but Lawhon is expansive in sharing those months of the family’s lives, from Anastasia’s perspective. There is little to none of the exorbitant lifestyle of a royal family, but rather the insidious decline from riches and admiration to deprivation and denigration. Lawhon brings to life aspects of Anastasia’s final months that I had not known about and they lend even more sympathy to a group of young women who went from being feted and admired, almost revered, to vulnerable girls at the mercy of men who hated everything about them and reveled in degrading them.

As I mentioned, the timeline in I Was Anastasia is anything but linear.  It is off-putting, to a degree, but may be deliberate on Lawhon’s part—to reinforce the sense of fracture in Anna’s life. The crux of her story is her quest to be acknowledged as the only remaining heir of Tsar Nicholas. For many this is seen as a journey of avarice, because if she is Anastasia she is the beneficiary to a fortune being held in an British bank, but Anna is not focused on that. Rather, Lawhon portrays her as a woman in search of identity and, in doing so, gives the novel a welcome depth beyond Anna as fortune hunter. It is one more positive aspect to a novel of so much history and, despite the known outcome, so well done. If you are a fan of Russian history then  I Was Anastasia is catnip, but even if you know nothing about the Romanovs, this is intriguing reading.

Her Dark Lies by J.T. Ellison

Lincoln in the Bardo

The Engagements
Mr. and Mrs. Doctor

Hamnet: A Novel of the Plague

Big Summer by Jennifer Weiner
All Things Cease to Appear

The Golden Couple: A Novel

The Wife, The Maid, and the Mistress