This week is it—the last bit of summer. At least, the traditional vacation aspects of it, because who knows how much longer summer-like weather will last? Either way, I’m ready for it. The past two weeks have been unpleasant, with an air quality rating in Seattle worse than Beijing’s thanks to wildfires in Canada and eastern Washington.

Enough about the weather! Time to jump into mini-reviews of two fun, fast novels that made for welcome summer reading.

A brittle socialite, her adult son, and their tattered cat debunk from the Upper East Side and head to Paris when their money runs out in French Exit. At 65 Frances is still a renowned beauty and was a fixture in Manhattan’s social scene until she left her dead husband (literally—she sees his body, tells no one and jets off to Aspen to ski), which some felt was indecorous at best and criminal at worst. After his death, her son Malcolm became her closest companion despite being only 12-years-old and having lived at boarding school for his entire life. And Small Frank, the cat? Well, Frances thinks he is a reincarnation of her Franklin, her dead husband.

At a time when there is no such thing as too much information author Patrick deWitt makes French Exit a droll example of the opposite extreme—nothing untoward and very little emotion. Frances is acerbic, but she clearly understands the underpinnings by which society is held together. She leaves Manhattan because her place, even as a semi-outcast, has been lost and she wants to return to a happier spot for her final days. As for Malcolm, he’s never made a decision in his life and is fine drifting along in Mummy’s wake—despite having a fiancé. They settle in a friend’s Paris apartment and begin accumulating an odd-lot of friends, especially after Small Frank disappears.

If this all sounds dreadful, it’s not. It’s sly and witty, even as deWitt maintains a tone of perfect detachment throughout the novel.  Honestly, why impose emotions when they’re so messy? If your husband was a vile human being and now is dead of a massive heart attack, why not go on vacation? The maid will find him. This attitude is epitomized by their feelings towards one of their new Parisian friends

They’d become used to Mme Reynard’s neediness and had decided the best way to curb it was to ignore her until she began behaving attractively again. Sometimes it took a while, for Mme Reynard was not unfond of self-pity, but sooner or later, thanks to time, or drink, or a restorative nap, she would return to her typical grace and good humor.

French Exit is chic reading that parses the themes of marriage, friendship, and death. It reminded me of the The Thin Man movies from the 1930s where both the martinis and the humor was deliciously dry. Expecting anything more from it would be unseemly.

You may remember my five-star love for Julie Schumacher’s debut novel, Dear Committee Members, and its put-upon main character, Professor Jason Fitger. Well, he’s back and now he’s the chair of the English department at Payne University and still battling the ever-encroaching Economics department. Only in The Shakespeare Requirement things have become dire as the Economics chair, Roland Gladwell, has taken his department’s definition to heart and by soliciting corporate sponsors and donors has overtaken an entire floor of their shared building and renovated it to standards unseen anywhere else at the school. His ultimate goal is wiping out the English department. As an English major it pains me to even type those words, but Schumacher, an English professor herself, reaches new heights of parody illuminating the very real struggle against decimation that liberal arts departments face in schools today.

As the man in charge Fitger quickly learns how little his title means. The department’s budget is dependent on a mission statement, but his overworked, apathetic, and often antagonistic professors cannot agree on anything. He also makes the mistake of trying to persuade the elderly Shakespearean professor to retire, only to turn the man into a campus-wide celebrity, at a time when the university is looking to pare back departments whose graduates do not turn into big donors.

In Dear Committee Members Fitger was largely endearing, even when whining. By the midpoint of The Shakespeare Requirement he veers into annoying, mostly because so many of his problems are self-inflicted. The humor gets lost where he’s concerned, but Schumacher more than makes up for it in taking on other hot topic issues in academia. There is the competition across Humanities departments to get and keep new students that mean graduation requirements are being dropped:

The students, who have requested anonymity, claim that the reading list for the fall class—on the “Literature of the Apocalypse”—was detrimental to their mental health and “psychologically hostile”

All in all, even though it’s not a mandatory part of any curriculum, The Shakespeare Requirement gets extra credit for keeping me entertained.

*Caveat: to fully get the most out of this book you need to read Dear Committee Members first. It sets up the situation and I loved it. It’s also a quick read.

The Transition by Luke Kennard 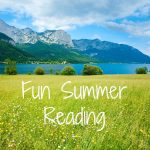