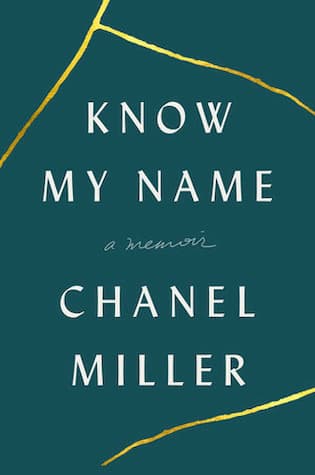 Emily Doe was the name given to the young woman sexually assaulted by Brock Turner, a Stanford student-athlete in 2015. If that doesn’t ring a bell, this should: he was given a sentence that was offensive in its leniency, inciting an outcry around the country. Know My Name is a memoir written by Chanel Miller. She is Emily Doe and she decided it was time to own not only her name, but her story.

Miller’s story illustrates the extreme difficulty for women getting justice in sexual assault cases. At first glance, her case was straightforward. Her attacker was caught by two men, while on top of her. He ran. He confessed to police. But in the length of time it took to go to trial he learned that she was not conscious and so his story became ‘it was a consensual act’. Miller could not even identify him and had no memory of the assault.

Know My Name is painful reading. Not because Miller sensationalizes what happened to her and the resulting trial and egregious judgment, but because of the total honesty with which she relays the facts of what happens to a woman’s psyche when she is attacked, when her being is violated—and then repeatedly violated in the court process. It is her character that is assassinated, intimate photos of her body that are displayed in front of the courtroom and, therefore, her family and friends. Her rapist is portrayed as a guy who got drunk and wasn’t responsible for his actions. But because she was drunk, it was her fault. Because a woman’s body is fair game whether she’s conscious or not.

One of the aspects of Know My Name that struck me most was Miller’s character. From beginning to end her concerns were more for the people around her than herself. She went to the frat party because her sister wanted her to go. When she came to in the hospital her first thought was that something had happened to her sister. That was all she wanted to know—is my sister all right?  Later, even after the assault became news she didn’t tell her parents, worrying it would hurt them too much. She only told them when she absolutely had to. It was the same way with friends and her boyfriend. Embarrassment, shame, and concerns about how they would feel, not for herself.

This is a book that will trigger women, even those of us who have never been sexually assaulted. At the same time, it is the emotional and psychological journey Miller makes that is the most piercing. She may not remember the act itself, but what is left afterwards challenges and damages all of her beliefs about herself. Throughout the years that constitute Know My Name she swings between a young woman of poise, humor, and determination, and someone who can’t sleep without the light on at night. Even the validation of the guilty verdict is countermanded by the paltry sentence and Turner’s complete lack of remorse. But he’s a detestable, tiny footnote in her story. With her voice and her writing skill I’m certain we’ll hear more from this strong young woman.

The Madwoman in the Volvo

The Falconer: A Novel by Dana Czapnik