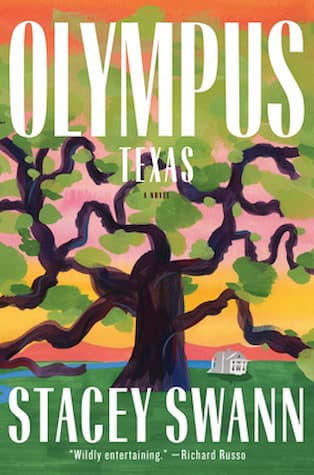 When the word Texas is in the title there’s an automatic expectation that what lies between the covers is going to be as bold, brash, and over-the-top as the state itself. In this way, Olympus, Texas does not disappoint. The Briscoes are the stars in the novel’s firmament, even if their shine is due to their bad behavior. Patriarch Peter can’t keep his hands to himself, which might be easier to ignore in a bigger town, but in Olympus it means he’s got more children than wives. In fact, June is his only wife and for decades she’s been content to accept his mistakes, after drawing a line in the sand he’s yet to cross. Apparently, it runs in the family as the youngest son, March, slept with his brother’s wife. Now, his return home after two years away is the match that starts a Texas-sized conflagration that threatens to leave their family in ashes.

Trying to untangle who’s talking to who in the novel is no easy feat. As the oldest son, Hap has the favor of both his parents and still lives in Olympus, but his sister Thea, departed for Chicago and a career in law decades ago and has little interest in contact with anyone but her half-sister, Artie. Who also lives in town with her twin brother, Arlo, when he’s not traveling with his band. They’re Peter’s children with another woman, but play well with the entire family. March is the wildcard. Even more so when his longing for family brings him back to Olympus, but his inability to control himself leads him right back to his sister-in-law Vera, within hours.

This rinse/repeat cycle of March’s careless lust, Vera’s vindictiveness, Peter’s benign neglect, June’s simmering resentment, and Hap’s rage could continue unabated for the length of the novel, but Swann inserts an even more explosive twist, which, much like the wash cycle, throws the family into greater disarray. The bond between siblings is tested like never before.

Olympus, Texas draws readers in in much the same way the nighttime soap opera, Dallas, kept viewers glued to their televisions. Most of the cast is deeply flawed and only marginally likable, but as they all embody at least one of the seven deadly sins, they are wonderfully entertaining. Great reading when you’re in the mood for lots of plot.

*I received a free copy of this book from Doubleday Books in exchange for an honest review.*

The Care and Feeding of Ravenously Hungry Girls

A Girl is a Half-Formed Thing

Ariadne: A Novel by Jennifer Saint