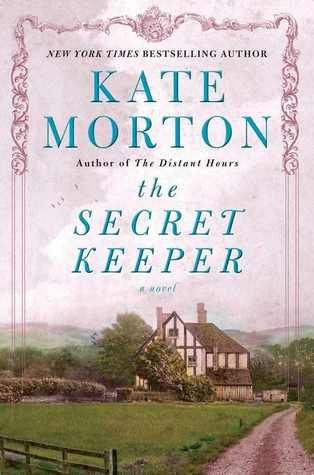 Kate Morton has been carefully wooing readers in the realm of mystery since 2008.  With her latest release she not only cements her relationship with existing readers but will draw in a whole new crowd of followers. The Secret Keeper is one of those marvelous books that, once started, is almost impossible to put down.

It is with the self-absorption of youth that all children believe their parents sprang into existence when they were born. Mummy had a life before you came along? Not possible. Morton turns this childish treatise upside down in The Secret Keeper when sixteen year old Laurel witnesses her mother Dorothy stab a man to death. The incident is closed by police as a case of self-defense and the young Laurel goes on to a successful career as an actress but when she is drawn home decades later by her elderly mother’s failing health, her mind turns back to the past and the truth behind what she saw.

It seemed suddenly to Laurel that all the absences in her own life, every loss and sadness, every nightmare in the dark, every unexplained melancholy, took the shadowy form of the same unanswered question, something that had been there since she was sixteen years old—her mother’s unspoken secret.

Morton moves The Secret Keeper amongst a varied cast, from Laurel and her family to people from Dorothy’s past in 1940s London—a young woman named Vivien Jenkins and her first boyfriend, Jimmy Metcalfe. These are not just ancillary characters, each is fully drawn and speaks from their own perspective, revealing their thoughts and motivations, all of which complement and contradict everything Laurel has come to believe about her mother. For the wealthy Vivien Jenkins (nee Longmeyer), who seems to have it all, there are secrets that ran as deep, if not deeper than those Laurel is trying to solve.

And so, when the essence of light and life that had been Vivien Longmeyer contracted itself for safekeeping and disappeared deep inside her, the world kept moving and nobody saw it happen.

The quest for answers begins with Laurel’s visit to her mother and finding a picture of her as a young woman in 1941. That and the wanderings of Dorothy’s mind, back to another time, bring back her own memories of childhood and what she saw, about which her mother would never speak. Her interest piqued, she begins investigating her mother’s early life.

The Secret Keeper is a delicious mystery in that it draws the reader deeper and deeper into a labyrinth of clues that reveal yet shadow and in this it keeps the reader engrossed and guessing. However, for all its complexity and blending of past and present The Secret Keeper is a true labyrinth in that there is only one way out and with Morton’s gifted imagination and thoughtful prose the reader will not be left lost.

Dare Me: A Novel
Tigers in Red Weather

In the Blood
Diamond Head

The Clockmaker’s Daughter by Kate Morton