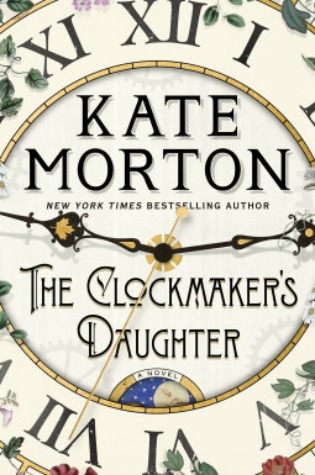 Time passes differently when I’m alone in the house; I have no way of marking the years. I am aware that the sun continues to rise and set and the moon to take its place, bu I no longer feel its passage. Past, present, future are meaningless; I am outside time. Here and there, there and here, at once.

In present day London, Elodie is an archivist who comes across a leather satchel containing a portrait of a beautiful young woman. Over one hundred years earlier 7-year-old Lily is an orphan taken off the London streets by an avaricious woman who grooms her as a thief. When she is a teenager she catches the eye of Edward Radcliffe, a wealthy artist who pays her to be his muse—a situation her employer encourages until she becomes something much more. These two women, are the living center of Kate Morton’s The Clockmaker’s Daughter, but it is Birchwood, a manor in the English countryside, that is the sun in the novel’s universe. A sprawling cast, seemingly unrelated, orbit around it, as the house waits for its mysteries to be uncovered.

And what mysteries they are. There are Elodie’s discoveries which also includes a drawing of Birchwood, a place she feels is familiar, but which she doesn’t know contains a multitude of unanswered questions. Namely, those about an idyllic summer when a group of artists and friends gathered that ended with one woman dead, another vanished, a priceless gem stolen, and a man’s career destroyed and his heart broken. It’s a lot, but what Morton does consistently and so well is create an alternate world where immersion in a story is completely possible. In The Clockmaker’s Daughter the cast includes friends, artists, school girls, relatives, musicians, World War II evacuees, historians, enemies…all written with the same level of care and attention. They live and breathe on the page, as do their stories.

Despite the numerous narrators and expanding, shifting plot in The Clockmaker’s Daughter there is no problem with confusion. Morton shepherds her readers carefully through her novels, and given their size and scope, it’s appreciated. However, in this case she is like one of those dear old friends who tells great stories, but sometimes embellishes them too much. There are so many back stories and ancillary characters that Morton’s innate attention to detail left me a little weary. She deftly juggles it all, but her desire to neatly tie up all the many threads she’s used makes for a knot tight enough to strangle. There is resolution all around, but in some cases, it feels forced. Something I haven’t noticed before in her other novels. The Clockmaker’s Daughter is still great escapist reading and perfect for gloomy, cold days, it’s just fell a bit short of my high expectations.

Brilliant: A Novel
The Chosen Maiden