Friendfluence: The Surprising Ways Friends Make Us Who We Are by Carlin Flora
Published by Doubleday
Publication date: January 15th 2013
Genres: Non-fiction, self-help 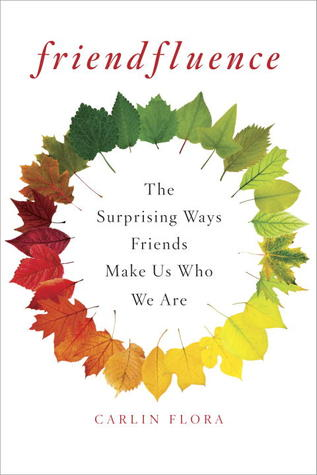 We tend to think all of our traits and life decisions can be traced back to our genes or the influence of our parents or partners, but it has become increasingly clear that our peers are stealth sculptors of everything from our basic linguistic habits to our highest aspirations.

Friendfluence is a well-researched but readable look at what many consider to be the most important relationships of their lives—friends. Author Carlin Flora uses extensive research and references numerous works on the many aspects of friendship and its impact on every stage of our lives.

While there are some statistics that will come as no surprise (teens are the age group most influenced by peers) there are others that are more subtle and unexpected, such as the fact that developmental psychologists agree that having good friends is more important than popularity and having many friends. And while females are generally thought to be more attuned to friendship and its benefits it has been found among teenage girls that endless rumination and conversation on negative subjects (grades, boys, and weight) make things worse not better. The best choice is the more masculine response of action or finding a solution. Finally, in a study that reads like a parent’s worst nightmare: if your teen daughter starts dating someone whose friends binge drink she will be 81% more likely to binge drink. It’s even worse if she only has a crush on him as she’ll be even more likely to do so to be noticed as “like-minded”.

When looking at why friendship is so important to humans Flora discovers that it is as simple as companionship—simply doing things together—that is the element of friendship that makes us happiest. However, the implications of friendships on our well-being goes much deeper. A Gallup poll conducted in the 1990s showed that alcoholism or drug addiction was only a symptom in homelessness and the root cause was the loss of a relationship with a friend or loved one. Even amongst types most often known for thriving when alone there are numerous examples of artists such as Monet and Renoir whose work flourished through their friendship. It is widely held amongst historians that the friendship between Churchill and FDR went a long way to shortening the war in Europe.

Friendfluence also examines modern day friendship and the impact of social media. Flora cites several critics who say that media such as Facebook are the end of friendship because they render it almost meaningless and hold people hostage to a computer rather than out interacting with other people. Instead of sharing thoughts and feelings to good friends only, they are being broadcast without discrimination to entire circles of friends at all levels. There is also the question of how socialized children can become when their interactions are limited to electronic exchanges. While Flora does look largely at the positive aspect of friendship she also covers the not so savory friendships—those who take advantage, are negative, or a bad influence.

Friendfluence is interesting and timely reading. The fact that the book covers the trajectory of friendship from childhood to adult also makes it relevant for anyone looking for answers or just a better understanding of their friendships. Everything is well documented but still reads easily. Also, Flora does not just cover the positive aspects of friendships but covers when friendships go wrong with those that are one-sided or with a person who is a bad influence. In the final chapter, Tom Rath of the Gallup Organization discusses the eight types of friends and how having each of these types (or a lack thereof) can impact one’s quality of life. At the end of it all, Flora finds that the oldest advice is still the best: to have a good friend you have to be a good friend.

Life from Scratch: a memoir of food, family, and forgiveness