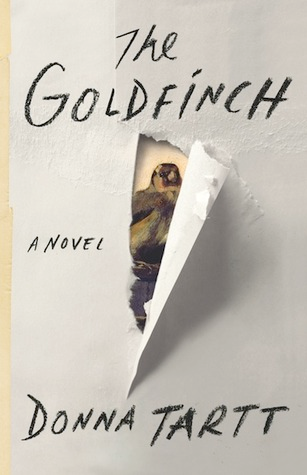 Donna Tartt’s latest novel is The Goldfinch. Oh My. This is a B.I.G. book, figuratively (Tartt’s first novel in eleven years) and literally (weighing in at a dense 771 pages on paper that is as weighty and glossy as the words printed on it). Theo Decker and his mother live alone in NYC. The story begins with a trip to the Metropolitan Museum before a school appointment for Theo, who has been suspended. The decision to stop at the Met, made by his art loving mother, is one that changes Theo’s life. A terrorist bomb rips through the museum while they are separated and only Theo emerges from the rubble alive. In the hours he is trapped, he comforts an elderly gentleman who drifts in and out of coherence and gives him two items that become a critical part of his future. One is a signet ring which he tells him to take to a specific house and they’ll know what to do and the other is a small painting the man sees in the dust and debris. He implores Theo to take it so it won’t be lost but it isn’t until he does that Theo realizes it is his mother’s favorite work, The Goldfinch by Carel Fabritius. A small piece, oil on wood, he is able to wrap it up and, like a totem, carries it with him into adulthood—despite  knowing it immense value in the art world.

While Theo owns the space of protagonist Tartt surrounds him with characters that shine. My favorite is his friend Boris, an amalgam of Eastern European origins whose claim to fame in the first half of the story seems to be no greater than keeping himself and Theo high or drunk for the majority of their teen years. At the same time he imparts a world-weary but exuberant attitude with a dark humor that makes him endearing. There is a vague feeling of relief when he exits the stage upon Theo’s return to NYC, but it is only a temporary break and despite his multitude of flaws he is a wise and witty person; the perfect counterpoint to Theo and his survivor guilt.

And yet to be with Boris was to know that life was full of great, ridiculous possibilities—far bigger than anything they taught in school.

There is also the luminous Pippa, a girl he had glimpsed before the explosion, who turns out to be the niece of the elderly gentleman he sat with. The signet ring connects Theo to her and to the man’s business partner, Hobie, who becomes the most steadfast presence in his chaotic life. For her part, the elfish Pippa, recovering from profound injuries in the explosion, fills his dreams  and, much like the painting, becomes a symbol for all that he desires in the world.

She was the golden thread running through everything, a lens that magnified beauty so that the whole world stood transfigured in relation to her, and her alone.

The Goldfinch is a profound work. It tells a tale with the best of them but also, goes so much further by encompassing all the grand themes—love, the meaning of life, our place in the world. These are not splattered across the novel in a Jackson Pollock frenzy but executed with the same precision and detail one might use to paint something as simple as a small bird tethered to a chain. Within so many pages, stories and themes it is hard to imagine that every noun, verb, and piece of punctuation could have been labored over, chosen and discarded, but with Tartt it seems completely plausible. There is the sense that she is acutely aware of every single choice made in the novel and to such a degree that  the reader can only show their appreciation by  a commitment to reading slowly and thoroughly, absorbing every word. There is nothing left to chance in The Goldfinch. Tartt creates a complete world, down to the sound a revolving door makes or how a European city has “cobblestoned loneliness” Her use of language is so precise that once she has described something it is difficult to imagine it any other way.

Precision can imply coldness or a lack of feeling but there is no such thing in Tartt’s writing. At its core, this is the story of a boy who loves his mother deeply and loses her while he is still a child. The rest of his life is shaped by this longing and sadness, exemplified by a small painting of a captive bird.

The painting had made me feel less mortal, less ordinary. It was support and vindication; it was sustenance and sum. It was the keystone that had held the whole cathedral up. And it was awful to learn, by having it so suddenly vanish from under me, that all my adult life I’d been privately sustained by that great, hidden savage joy: the conviction that my whole life was balanced atop a secret that might at any moment blow it apart.

Z: A Novel of Zelda Fitzgerald

The Book of Strange New Things

A Dictionary of Mutual Understanding
Dryland: A Novel
Invincible Summer
Shelter in Place

The Lost Letter by Jillian Cantor

The Life and Love of Cats