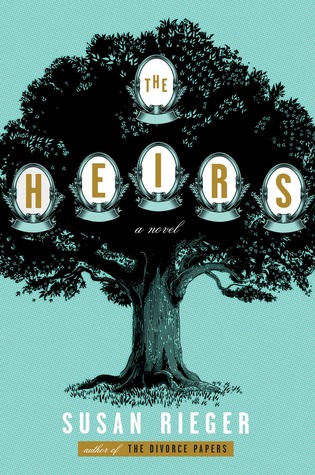 Sometimes, misinterpreting book blurbs can be a big mistake, leading to disappointment and frustration. Then there are the amazing times when a book sounds like one thing and turns out to be something even better. I’ve had both experiences and while the former can make you swear to never read another synopsis or blurb, the latter can be like Christmas dipped in chocolate.  Last week Christmas came early with Susan Rieger’s The Heirs. I thought it would be light summer reading about when the death of the father of a wealthy Manhattan clan reveals secrets that his children must come to terms with. You know, badly behaved rich people! This is not inaccurate, but it’s like saying Breaking Bad was about making crystal meth.

Cancer kills Rupert Falkes at age sixty-five. He’s a successful, prestigious lawyer who leaves behind his wife of forty years, Eleanor, and his five sons, Harry, Will, Sam, Jack and Tom. Six months after his death Eleanor receives a letter and photograph from a woman claiming that Rupert is the father of her two sons and that he had been supporting them up to his death. She wants their share of Rupert’s massive estate. She goes public, giving interviews to the tabloids. Suddenly, what was a tight knit family starts to show strain as each person weighs in on how to deal with this disaster.

All right, this sounds pretty salacious so you might be doubting me BUT, while this is the issue that causes the drama, the plot is not what makes The Heirs such all-consuming, gorgeous reading. Instead, it’s that Susan Rieger renders each of her characters with an inner life that is as vivid as their outer demeanor is proper. This is especially true of Eleanor, raised in a wealthy pedigreed family by a mother who

…took a hard line against female intelligence, thinking it suspect in a woman, unpardonable in a girl.

Her marriage is not one of love or convenience but something in-between, such that in the novel’s opening pages, she is described as

Eleanor was like a ballet dancer; what she did was hard work, born of arduous training, made to look as effortless as breathing.

And yet, Rieger doesn’t fall into the trap of making Eleanor, or any of the women in The Heirs, one-note, decorative placeholders. The wisdom of women runs strong throughout the novel. Not that the men are especially caddish or stupid, but Eleanor, in particular is the type of character so perfectly executed by a writer that I tag an enormous amount of her dialogue. Such as:

Rudeness, she had discovered, was an earthquake emotion, growing exponentially with each eruption.

When her middle-aged son, Sam, says he doesn’t understand her:

“It’s the angle. You can’t see me from where you’re standing.”

In today’s world of verbal vomit where eloquence and being articulate is considered elitist and a liability, where shouting is the norm, the quiet, elegant prose in The Heirs provides much needed relief. Its restraint reminded me of Henry James and Edith Wharton and their novels of the hidden depths of emotion found in tightly controlled lives. Understated and finely drawn it is no less powerful even though much goes unsaid. For her part, even when these emotions are foreign Rieger’s skill makes them relatable. The Heirs has a marvelous plot, but ultimately it is a tale of characters. An origami swan of a novel with a graceful shape that when unfolded opens to a multitude of layers, textures and colors.

A Column of Fire by Ken Follett

Maybe You Should Talk to Someone