This post may include Amazon links. As an Amazon Associate I earn from qualifying purchases.

I was going to call this post Short and Sweet, but the title is not quite right for these three novels. Sweet implies a bit of passivity and isn’t often a trait I like in my fiction. Instead, each of these small books belied their size with the force of their stories. Because they’re such quick reads they make a perfect palate cleanser after all the richness of Thanksgiving. They’ll clear your mind and leave you ready for anything you want to read before the end of the year.

This Is Pleasure: A Story by Mary Gaitskill
Published by Pantheon
Publication date: November 5, 2019

Recently I reviewed The Liar, a novel where I felt the author was treading on territory that undermined the serious reality of the subject. This is Pleasure does the same thing, but, whether it’s author Mary Gaitskill’s writing or her handling of the subject, I was not put off. The novel is about Quinn, a well-known figure in the publishing world—a editor who had found and nurtured talent throughout the years. His personal style is overly dramatic and what we used to call “touchy-feely”, but which is now synonymous with unwanted physical contact.

With #MeToo at the forefront of our consciousness, This is Pleasure is uncomfortable reading. Unlike The Liar, I appreciated the off-balance feeling I had while reading it. Gaitskill in no way diminishes Quinn’s actions, but she presents them as one part of the whole man. She also gives a voice to Margot, one of his closest friends, a woman who knew firsthand of his idiosyncrasies. How she reconciles her perception of the man against the now very public outcry against him. This is not apologist fiction, just a quick, interesting venture into the new world of professional mores between the sexes. 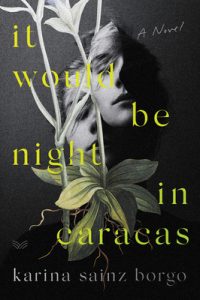 It Would Be Night in Caracas by Karina Sainz Borgo, Elizabeth Bryer
Published by HarperVia
Publication date: October 15, 2019

It Would Be Night in Caracas  is a dark, dark novel about one woman’s life in Caracas, Venezuela, as the city succumbs to the political and military upheaval of the 1980s. Adelaida has just buried her mother, a task that meant taking her life in her hands to get to the cemetery and back. Every structure in the city has collapsed—financial, legal, law enforcement. There is almost no way to tell between government forces and the revolutionaries. Both will either kidnap and torture you or kill you outright. When a group of looters take over her apartment and kick her out, she turns to a neighbor for help.

If Karina Borgo’s goal was to drive home the unrelenting terror and unremitting chaos of dictatorships run amok then she succeeds. It Would be Night in Caracas needs to be a small book because 300 pages of Adelaida’s life would be unbearable. The tension and surreal aspects of a government overthrow and its impact on the average citizen punch hard. Not easy reading, but as a cosseted American I definitely got a feel of what desperation might drive a normal person to do.

Airplane travel is not something most of us think of when we think of creative writing. David Szalay changed that for me in his slender novel, Turbulence. He begins by naming his chapters with the three letter airport codes—the first being where the flight originated the second, its destination. Within each of these bittersweet chapters are small slices of life.

Sazlay not only links airports, he does the same with his characters. On a flight with excessive turbulence a woman talks to the man next to her. That man arrives home to find his driver awaits him with news he won’t share. A man in a taxi near the first man’s house worries about being late for his flight. And on it goes.  The connections may be brief, but they’re deep, encompassing every aspect of the human condition—health, relationships, culture, economics, death.

Despite spanning the globe, the novel begins and ends not only in the same airport, but with the same family. Turbulence is elegant in its simplicity and illustrates that distances pale in significance against the links that unite us. We are all closer than we think.

Have you read any small books this year that you’d recommend? Please share in the comments!

March Reading Recap
Guapa: A Novel
In the Language of Miracles

Alice in Bed: A Novel

January Reading Wrap-Up
How I Became a North Korean