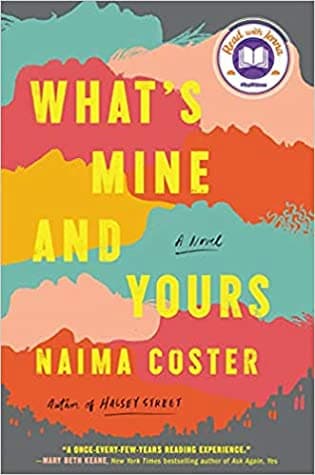 In Piedmont, North Carolina in the 1990s two women are faced with raising young children on their own. Jade and her son Gee are Black while Lacey May and her three daughters are White. Both are living on the same edge of desperation, but in What’s Mine and Yours each responds to her circumstances in very different ways. Ways that come to clash a decade later, when despite it being 2002, school integration is still a divisive issue in the South.

There are three timelines in What’s Mine and Yours. In the earliest Jade and Gee suffer a tremendous loss when Ray, Jade’s boyfriend and the only father Gee knows, is killed in an altercation. This is deeply unfortunate for the novel as well, because within the single chapter he inhabits, Ray is one of the strongest characters in the book. Which may be why he was killed—even as a reader I felt his loss and knew the impact it would have. Still, not a choice I liked.

In the same period, Lacey May and her daughters are living without the basic necessities while Robbie, her husband and the girls’ father is in prison. Unable to find work, Lacey May agrees to move in with a kindly, but hapless man who loves her and is willing to accept whatever crumbs of affection she shows him. This transactional union on her part continues through the novel as Lacey never divorces Robbie or cuts ties with him. He’s an addict and despite his love, his poor choices impact the family throughout What’s Mine and Yours.

In the present day, Noelle, Lacey’s oldest daughter, is contemplating the state of her marriage. Her husband, a photographer, is in France on a project, but the distance between them is becoming more than just miles. Margarita, the middle daughter, is in L.A. pretending to be a star, but with no real success, while Diane, the youngest is still in North Carolina and the only one of the three who has any contact with their mother.

The present and the past converge in 2002 when the local high school arrives at a plan to bus in predominantly Black students from the opposite side of town to increase diversity and opportunity for the county as a whole. Lacey May and Jade stand on opposite sides of the issue—with Lacey asserting her conviction that her daughters deserved to be in the school and their opportunities would be diminished due to the influx of new students. Noelle and Gee manage to forge a much-needed friendship for both, but are ultimately caught in the crossfire.

In creating Lacey May, author Naima Coster writes a character sure to evoke a response. For me, it was antipathy, as this woman who had done nothing more than dupe the right man into supporting her, asserts her rights to benefits she wants to deny others. Others like Jade, who has put herself through school, working multiple jobs, to earn a degree in the medical field. All great novels need a counterpoint character, but Lacey, with her entitled hypocrisy, rang so true to much of the racism going on in America today, that I tuned her out.

Oddly, despite my reaction to Lacey, the rest of the novel left me indifferent. Whatever pull was needed to exert itself and hook me never materialized. Instead, I skated on the novel’s surface and quickly forgot it after I finished. What’s Mine and Yours is a good book, but great books stay with me and make me think and it missed the mark.

*I received a free copy of this book from Grand Central Publishing in exchange for an honest review.*

I’ll Be Gone in the Dark

The Art of the Restaurateur