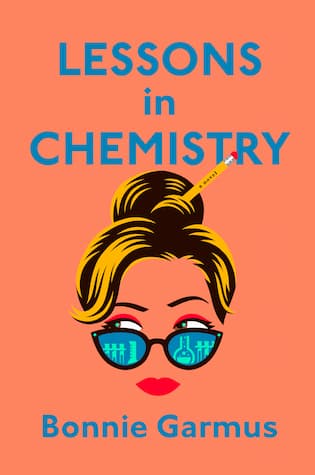 It’s the 1960s and you’re a brilliant chemist exploring one of the most elusive topics in chemistry—the chemical reaction that led to life. You should be at the forefront of the scientific community. Instead, you’re grappling with your thesis advisor as he tries to rape you and later being called “luscious” by the director of a chemical laboratory where you work. This is Elizabeth Zott’s life in Lessons in Chemistry, another fabulous novel that kept me entranced by a myriad of emotions that were revelatory and familiar.

When Lessons in Chemistry begins Elizabeth is tucking a note into her daughter’s lunchbox that reads, “It’s not your imagination. Most people are awful.” Madeline is five and has been having trouble at school. This parental attitude told me everything I needed to know about Elizabeth—she was my kind of gal. Unfortunately, most of the world around her disagrees. A single mother in 1961 and a woman who believes herself to be the equal of the men around her, did not do well in society. But, given that she’s a scientist through and through, means Elizabeth cannot grasp other people’s perceptions of her, either personally or professionally.

It’s Elizabeth’s refusal to slot herself into society’s preassigned role that lands her with no job and a young child. When the offer to host an afternoon cooking show arises, she takes it, despite finding the whole thing demeaning. She needs the money and so decides to do it her way by basing the show around the laws of science and the chemistry of cooking. This, plus her no-nonsense outspokenness about the job of being a mother means she gains a battalion of female followers and almost as many men who threatened, angry, or both.

If Lessons in Chemistry sounds like a feminist manifesto, don’t worry, it’s not. Debut author Bonnie Garmus author is wonderfully creative and imbues even the rage-y scenes with humor, all while telling a story that encompasses love, motherhood, friendship. She populates Elizabeth’s world with characters who evoke a full range of emotion, even including a dog. That each experiences situations that highlight their strengths and foibles only adds to the novel’s richness.

By halfway through Lessons in Chemistry I was in love with Elizabeth, the way her brain worked, and the world Garmus created for her. If that love blinded me to an ending that wrapped up neatly so be it. I’m not usually a fan of tidy endings, but there is enough messiness, heartache, and pain in Lessons in Chemistry (and maybe also the real world right now) that I wanted needed a happy ending for this perfectly crafted story I loved so much.

*I received a free copy of this book from Doubleday in exchange for an honest review.*

The Woman They Could Not Silence

A Spark of Light by Jodi Picoult
The Madwoman Upstairs