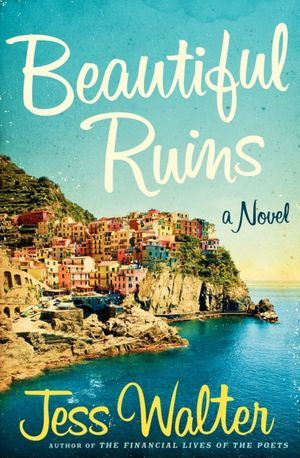 In a remote village on the coast of Italy the young owner of The Hotel Adequate View receives only the second American guest in the hotel’s history. She’s surrounded by mystery but appears to have come from Rome where the filming of Cleopatra is still ongoing. Little does Pasquale Tursi know it, but his life is about to be changed forever.

Beautiful Ruins is an expansive story that covers multiple locations, time periods and a lengthy parade of characters. In the sense that this is a book about Hollywood and how it can go wrong, the book itself is a prime example. It’s the pitch made by a desperate screenwriter who believes if he just throws everything into the mix, the studio will buy it. While Walter’s prose reads well, there are too many characters for the reader to form any sort of attachment or even opinion about them. The plot is well paced, despite moving from the 1960s to present day to indeterminate years and back again. Adding more and more detracts from the touching story trying to be told. Instead, the reader has to muddle through the comings and goings of a sleazy Hollywood producer who has had so much plastic surgery he looks like a wax elf, a confused and unfulfilled development assistant, an old-school Italian enforcer, a wannabe screenwriter with a screenplay about the Donner Party and finally, the great Richard Burton himself, each clamoring for attention and, possibly, providing some amusement, but no substance. This feels like an opportunity lost.

Neverhome: A Novel
Havisham: A Novel

It’s Monday, August 7th: What Are You Reading?

The Word Exchange: A Novel

Turtles All the Way Down by John Green
I Saw a Man: A Novel

The Widow’s Guide to Sex and Dating