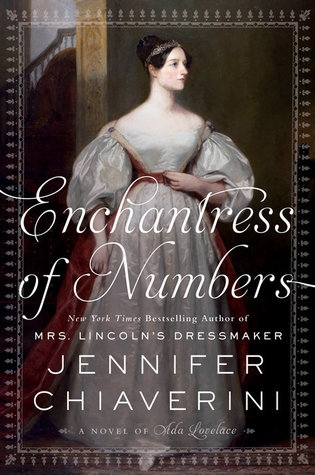 What kind of child might you get if you matched a world-famous poet known for his outrageous lifestyle and a genteel woman with a penchant for knowledge and restraint? If it was the early 1800s in England then you’d get Augusta Ada Byron, the only legitimate heir of Lord George Gordon Byron. Enchantress of Numbers is Jennifer Chiavarini’s new novel about Ada’s life—a life that is as fascinating in its own way as her father’s was tempestuous.

By the time Ada was born, the marriage of Lady and Lord Byron was already dying. Byron was famous for his mercurial temperament and his wife had hoped marriage would give him much needed stability. Instead, she learned of parts of his past that made her question his sanity so she took their baby daughter and moved back to her parents’ estate. Given that this was the early 1800s divorces were virtually unheard of, so they were separated, but Annabella was determined to keep Byron out of Ada’s life. Moreover, she worried Ada could have inherited his bad blood; she believed that for her daughter

Her salvation depends upon developing her moral and intellectual powers and suppressing everything of the imagination.

To this end, not only did she never see her father in her lifetime, but also, she was allowed no fairytales at bedtime, no imaginary friends, none of the normal inclinations of childhood. At the same time, her mother’s fears were so great that Byron would try and steal Ada that guards patrolled the estate. The result was a lonely, isolated childhood because, for all her concerns about her daughter, Ada’s mother was even more concerned with herself and her impossible-to-diagnose illnesses that kept her traveling to spas around the world for months on end. Her neuroses extended to firing any nanny or governess if Ada appeared to love them more than she loved her absent mother.

Despite these emotional deprivations, Ada found solace in the world of mathematics and by the time she was 20 she was attending salons with notable inventors and scientists and being lauded for her genius with numbers. She was also beginning to find her way socially as well. Much like the children of celebrities today, as the only known child of Lord Byron, Ada was hounded and sought after by the press and fans of her father. It created a fear in her that she could not be loved just for herself. At the same time, she did not want to be forced into marriage, knowing full well that few men of the times would allow their wife to continue with scholarly pursuits. These fears was allayed when she met William Lovelace, a man who met all of her mother’s stringent requirements and who loved and accepted Ada.

Given that Ada’s passion was mathematics there are many ways in which Enchantress of Numbers could become less-than-interesting reading. Thankfully, Chiaverini’s combines authenticity with the less tangible aspects of human nature for a novel of richness and depth. She uses the facts of Ada’s childhood and relationship with her mother to write fascinating fiction, but never strays into sensationalism. The same is true regarding her life after marriage. In doing so, she provides a nuanced look at a woman with an extraordinary mind who lived an extraordinary life.

Enchantress of Numbers makes it clear that, whether by nature or nurture, Ada was the perfect amalgam of her parents. After watching how a mechanical loom worked her brilliant mind led her to create an algorithm and to suggest the use of punch cards in order to allow the first adding machine to calculate much greater sums than what the inventor intended. In this way, a fantastical leap of imagination from loom to calculation made her the first person to create a computer program. The boundless leaps her mind took into unknown territory is astonishing. These pragmatic solutions did not exist, had never been conceived, yet in her fertile mind she created them. In her own way, she made of numbers a poetic greatness. She was, despite her mother’s best efforts, her father’s daughter.

I think that all my life, in small ways and great, I had tried to bring together the intellect and the imagination, sensing that they were not two separate faculties, but two halves of the same genius.

City of Women
The Summer Guest

The Woman in the Window