Last week I started this little feature for books that don’t quite fit in the normal summer reading mold. This week’s pick is still a quiet character study, but about a devastating time in history. 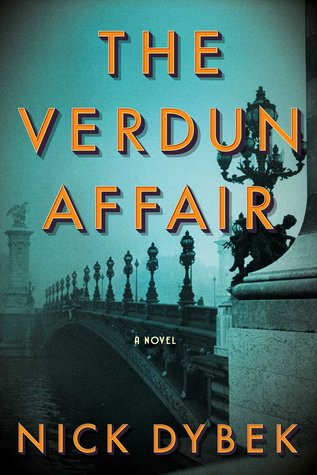 I have read many, many novels about World War II, but very few about World War I. That, plus a level of ignorance that feels embarrassing means I didn’t know that in 1916 almost one million men were casualties on the fields of Verdun, France. Nick Dybuk revisits the time and place in his new novel, The Verdun Affair, a story about two men and a woman for whom what happened in Verdun connects them not just in 1920, but again in 1950. For each, it’s something different—for Tom, bringing dignity to the dead; Sarah is searching for her husband, and Paul, an Austrian journalist, is looks for justice. When a soldier with amnesia appears in Italy their stories come together.

Tom is an American working with a church in Verdun that helps refugees and those looking for lost loved ones. He goes out each day as a bone collector—gathering up the unidentified bones of the dead and placing them in a memorial shrine. At the church he meets Sarah, a woman searching for her husband. She is certain that he is still alive. They have a brief affair until she learns of the soldier in Italy and leaves. When he follows her they meet Paul, a journalist who was formerly an Austrian soldier, who has his own reasons for interest in the man.

Dybek painfully captures the mayhem of people of many nationalities—parents, girlfriends, and wives—descending on what were the largest killing fields up to that time. Each desperate to learn if any of the living wounded, many of whom are suffering from the psychic aftereffects of mustard gas, are their loved ones. Dybek aligns their stories with precision even as their lives move apart, right up until the United States in 1950 when Tom and Paul see each other again. While each knows only a part of the other’s story, Dybek tells the reader all, even though there is no neat conclusion to the novel.

Unlike The Garden Party last week, which was a more lighthearted look at human nature, The Verdun Affair is heavier, carrying the weight of death and loss. But it does so with a stately sorrow that doesn’t sink the novel. Scanning or skimming won’t work—Dybek’s words are too carefully chosen and need attention. This is not pool or beach reading, it’s a book for the porch or under a tree’s shade—quiet spaces for contemplative reading.

The River by Peter Heller