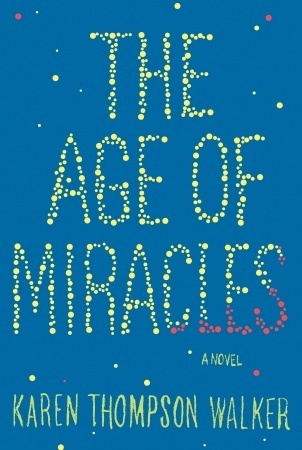 It isn’t noticed at first, but on October 6th in some unspecified year of the not-so-distant future the scientific community notifies the world that Earth’s rotation is slowing and that a day has grown to last almost 25 hours. Panic erupts around the globe as people absurdly believe they can run somewhere where it won’t matter, but for middle-schooler Julia it feels less momentous than what’s happening around her. Author Karen Walker titles her debut novel, The Age of Miracles, for this stage in life:

A time when kids shot up three inches over the summer, when breasts bloomed from nothing, voices dipped and dove. Our first flaws were emerging, but they were being corrected. Blurry vision could be fixed invisibly with the magic of the contact lens. Crooked teeth were pulled straight with braces.

Time may feel like it’s moving faster for Julia and her friends, but the facts are a slower rotation means on Earth a day stretches to 48 hours and keeps going. Gravity’s hold grows stronger, birds cannot easily fly, crops fail, world order is dismantled. But as people and governments fight to maintain control, Julia is battling her own issues. Her best friend, a Mormon, moves back to Utah with her family for the end days. Her mother suffers physically from the slowing. Her grandfather thinks it’s a government conspiracy and disappears. Most importantly, she’s in love with a boy who seemed to like her but won’t even talk to her anymore. This contradiction of time saturates The Age of Miracles with a sense of melancholy.

I read Walker’s second novel, The Dreamers, about people mysteriously falling asleep, and now, having read The Age of Miracles, I’m even more appreciative of her dystopian creativity. No quick and easy nuclear annihilation or flu pandemic for her. Instead, she takes grand concepts (sleep, time) and slots them into the minutiae of daily life. With thoughtful prose she probes the emotional impact of unseen forces. This allows the juxtaposition of the horrors of middle school and being a girl to hold their weight against the very real threat of the end of the world.

Running: A Novel by Cara Hoffman
The Summer Guest

An American Marriage: A Novel
The Portable Veblen

When Breath Becomes Air
Where They Found Her