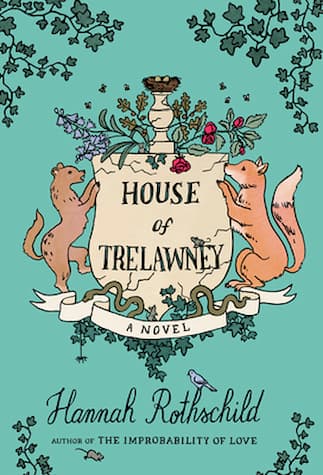 An 800-year-old family estate in Cornwall, England is at the heart of Hannah Rothschild’s new novel, House of Trelawney. The house is occupied by Kitto and Jane, the current Earl and Viscountess; their three children, and his infirm parents.  What’s missing is the money needed to keep Trelawney running. Actually, there isn’t even enough money to keep it habitable as they’ve just run out of heating oil because they can’t pay the bill.

Jane is the only person who recognizes the family’s plight. Her fortune helped when she married Kitto, but it’s long gone. He works in London in a figurehead role as CEO of an investment bank and stays in their London apartment during the week. Her in-laws refuse to change their attitudes in any way meaning Jane now plays the role of all the servants who are long gone. Kitto’s sister, Blaze became a wildly successful and wealthy fund manager, but as she was ousted from Trelawney when she came of age, she’s had no contact and provided no money.

Rothschild decides to shake up her clueless aristocrats by adding a newly orphaned 19-year-old—the daughter of Kitto’s first love and Blaze’s best friend. The stunning Ayesha has one thing on her mind—meeting her father, a mystery no one’s solved yet, and marrying rich. And did I mention that it’s 2008 and Blaze has been predicting an economic collapse caused by subprime mortgages and deregulation? Like Cassandra, she’s seen the future but no one will listen. Only now that future, and Ayesha, have arrived in their lives and look poised to decimate their lives.

If you’re getting a sense of a lot of plot, you’re correct. Sadly, the novel House of Trelawney is no more able to bear the weight than the actual house of Trelawney. Part of this may be due to the time period—the lead up to the great recession of 2008, but even beyond that the novel feels lackluster. Rothschild’s previous novel, The Improbability of Love, had a creative spark that, even when it was serious, gave a joyousness to the writing that made it exciting to read. There is nothing fresh here. Some of the ideas and themes feel recycled and all-too familiar: the disgusting, venal American hedge fund billionaire trying to buy his way into British society, the philandering Trelawney men, the lay about, spoiled children.

Rothschild scores some points for her portrayal of the key women in House of Trelawney. Jane’s management of Trelawney is not much different than running a corporation on the edge of bankruptcy and she’s doing it with three children and no income. Blaze was the more talented, ambitious child in the family, but British inheritance laws meant she was left to fend for herself in the world while Kitto inherited everything. There’s even a great-aunt who’s treated as a crazy spinster, but who is, in fact, a famous scientist. Unfortunately, while the reader can see the reality, the novel slogs along with tired stereotypes. I wanted to love this novel, but it left me disappointed.

The Stranger in the Woods

What I Need When I Read

How Hard Can It Be?
Idaho: A Novel by Emily Ruskovich

This is Between Us