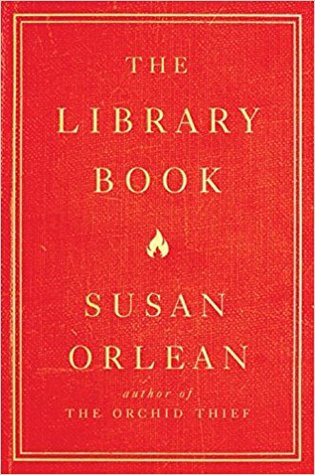 It’s embarrassing enough to be ignorant about American history, but, as a librarian, to not know about the largest library fire in the country? I’m pretty sure my librarian membership can be revoked for that. Thankfully, Susan Orlean’s new book The Library Book not only remedies my ignorance, but is a reminder of why libraries are one of the greatest government institutions in any country. As she describes, they are much more than a home for book.

It wasn’t that time stopped in the library. It was as if it were captured here, collected here, and in all libraries—and not only my time, my life, but all human time as well. In the library, time is dammed up—not just stopped but saved. The library is a gathering pool of narratives and of the people who come to find them. It is where we glimpse immortality; in the library, we can live forever.

In 1986, the Los Angeles Public Library was consumed by a fire that burned for seven hours and took over 300 firemen to put out. While the stone building was not destroyed over 400,000 books were lost and another 700,000 severely damaged due to water and smoke. Damages totaled over $22 million. Orlean details many of the irreplaceable items that were lost, including a Shakespeare folio. Once the fire was out the questions about how it started began. The building was known to be outdated and a fire hazard, but it was determined that this was arson. Orlean shifts through the ashes of the investigation and the resulting arrest of a wannabe actor named Harry Peaks. What she compiles is a gripping book that it is equal parts true crime, the science behind fire and arson, and a history of the Los Angeles Public Library.

Much like libraries themselves, The Library Book contains a wealth of interesting information:

But, for every fact Orlean gives about the fire, the investigation, Harry Peaks, and the scientific facts about fire, there were profound and touching paragraphs about the books themselves, the library and librarians who loved them, and the city of Los Angeles. I don’t put books on par with people in their importance in the world, but within the first thirty pages of The Library Book, as Orlean describes flames engulfing the building and the horrified librarians openly weeping at the loss, I was crying myself. They resonate that deeply with me and Orlean’s depiction is heart wrenching.

A library is a good place to soften solitude; a place where you feel part of a conversation that has gone on for hundreds and hundreds of years even when you’re all alone.

All the Broken Places

Sourdough: A Novel by Robin Sloan

The Falconer by Dana Czapnik