Lion or lamb is the big question, both for the weather and March’s reading. In Seattle we often had lion-like winds and cold temps but with the bright sunshine-y fun that feels as cute and welcome as  lambs. In reading, I have to say if I look at the two to mean strength versus weakness then it was a lamb-y March. Only one new release made it to 4 stars while the others rested at or below 3 stars (which is just a good, not great).  Hopefully, the old saying about March showers bringing April flowers means there’s great reading ahead.

Love, Hate, and Other Filters is a well-written young adult novel about 17-year-old Maya, an Indian-American Muslim, living in a small town in Illinois. Despite being the only Indian and Muslim at her school, her life is relatively normal—college prep, boys, and making movies. She’s even dealing with her mother’s fervent desire to find her a husband, Not too get married just yet, but to have the deal locked up before she goes to college. Except Maya’s in love with a white boy. When a suicide bomber destroys a nearby government building everything changes for Maya. Sometimes, YA reads the same for adults but this doesn’t. Not bad, but definitely meant for teens.

Let's No One Get Hurt by Jon Pineda
Publication date: March 20th 2018

This novel falls into the ‘young girls being raised off-the-grid in odd, possibly abusive situations’ premise that standout novels like My Absolute Darling and Our Endless Numbered Days delivered with power and finesse. Only it doesn’t. It comes off as creepy and weird and I gave it up at the halfway point.

I need to make something perfectly clear: I love Elizabeth George’s Inspector Lynley mysteries and in those mysteries, the rumpled, frazzled, foul mouthed Barbara Havers is one of my favorite characters. But…The Punishment She Deserves was not one of my favorites. George is such a highly skilled writer that she can pour 6 different plotlines in one novel, but should she? In this case, no. The novel is set in the city of Ludlow in Shropshire, England where a church deacon has killed himself. Havers, who is on very thin ice in the department, is sent to investigate. From there, The Punishment moves into detailed side plots about marriage, motherhood, pedophilia, alcoholism, rape, police force funding cuts, binge drinking, parenting, and religion. George ties it all up with a neat bow, but at 704 pages I wish she had opted out of at least two of these subjects. I feel as if she’s ready to write something other than mystery, something deeper on social issues—which would be amazing.

Anatomy of a Miracle: My review 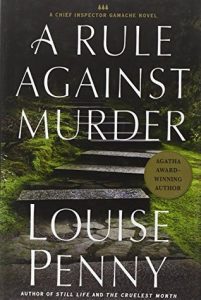 Did you think I’d go more than a month without reading Louise Penny? Hell, no! A Rule Against Murder is back in Three Pines, this time looking into the life of Peter Morrow, Clara’s husband, via his viciously dysfunctional and wealthy family. For the first time Penny leaves one of the smaller ancillary mysteries in the novels unsolved and as little as it was, I felt cheated.

A story of love, loss, and marriage with more emotional twists than I ever expected

A novel that had me laughing all the way through

That, fabulous readers and bookish people, was my March. How was your reading?

Top 10 Books That Made Me Say Yum!

The Widow of Wall Street